Things haven’t gone according to plan. Our get to know-you-sail was postponed, then canceled because George, the skipper of Carpe Diem, has been sick for the last week and a half. We’ve been dockside in Sapphire Marina on the eastern side of St Thomas, an island in the U.S. Virgins that is highly developed in all the wrong ways. The marina couldn't be lovelier with a view of the British Virgin Islands and two beaches, two pools and gobs of internet. Still I’m looking forward to getting gone.

Last week,
while George was recovering, I took the fast ferry, Native Son, over to the Island of Tortola in the British Virgin Islands to see Soper’s Hole, the cove where my parents married thirty one years ago. We had planned to sail into Soper's Hole as part of our get-to-know-you sail, but the ferry was an experience all its own. The speed boat blasted head on into the trade winds, amplifying the wind's strength so that it almost hurt to keep my eyes open on the top deck. It felt good to peak outside the marina, to get a feel for the size and shape of the waves, turn blotches on the chart into places my eyes have seen and my feet have touched. Incredible to think that my parents saw these same islands more than thirty years ago when they were about my age.

Once through customs on Tortola, I turned right out of the ferry building and walked down the road thick with vegetation in what I hoped was the right direction. Eventually the road opened up into a patch of colorful, antique looking buildings, cute shops, and American style restaurants in front of docks lined with boats. I wandered along the marina walk wondering what it would have looked like thirty years ago. Today it seems like a disneyfied recreation of what someone might hope the Caribbean to be. I decided to eat lunch at a restaurant in a bright green house I had passed earlier behind the shops lining the waterfront. Though the view wasn't as nice, the food was delicious.

The restaurant, Pisces, didn't have printed menus. Two men eating their lunch at the front table, who had called out to me when I’d passed the first time with promises of delicious food, instructed me to talk to the chef to find out what was cooking. I walked back toward the kitchen and introduced myself to Sheila. She had chicken soup for $3-9 a bowl depending on the size, ox tail soup, the fish of the day, and conch for $18 a plate. I thought I should be frugal and have the chicken soup, but then I wasn't sure when I would get a chance to eat conch again. I himmed and hawed in the doorway, talking with Sheila, finally deciding on the conch.

I was expecting the conch to be chewy like a clam, thinking it was a big mollusk, but conch is actually a giant sea snail and the meat is delicate and succulent. Sheila, who was also the waitress, brought me a plate of sauteed conch in a butter sauce served with rice and peas, green banana, a dumpling, and best of all cassava. I ate my lunch in the front courtyard of the bright green house in the shade of palm leaves cooled by the steady trade winds. After licking my plate clean I couldn't help myself and slipped in and out of consciousness slumped in my chair. When I regained composure Sheila came to take my plate away and let me to guess the recipe for the conch, even telling me the secret ingredient: 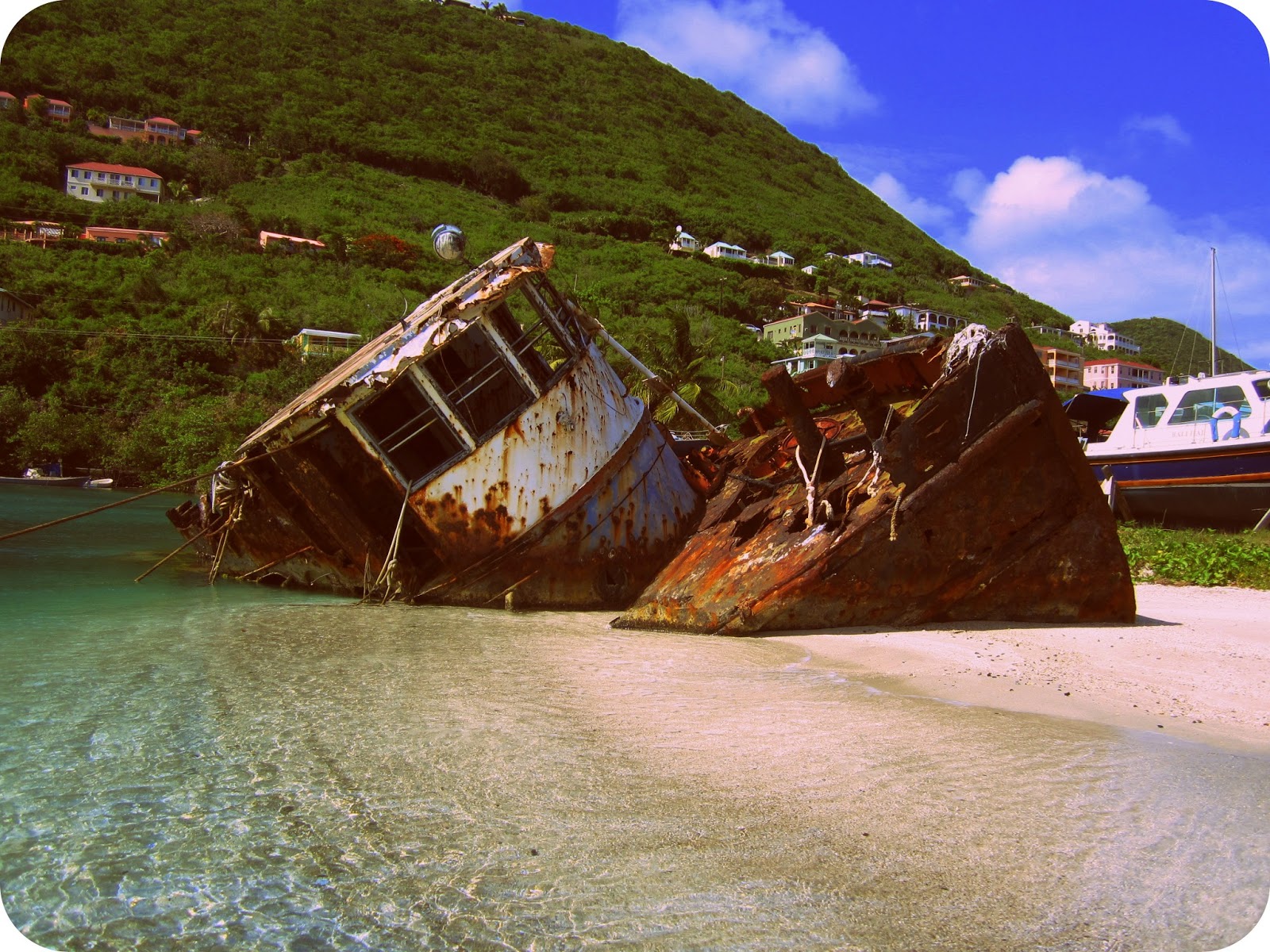 I left the restaurant with a Red Stripe in hand, drinking my beer as I walked down the road over to a boat yard and down to a beach strewn with beautiful decaying wrecks. From that beach the entrance to Soper’s Hole framed the other British Virgin Islands in just the same way as in one of my parent’s photographs.

I only recently realized I want to get married and there I was standing on the sand looking out at the cove where my parents promised themselves to each other. In that moment I felt acutely that I was alone on the beach, but I was still glad to be there.
Posted by Unknown at 8:25 PM